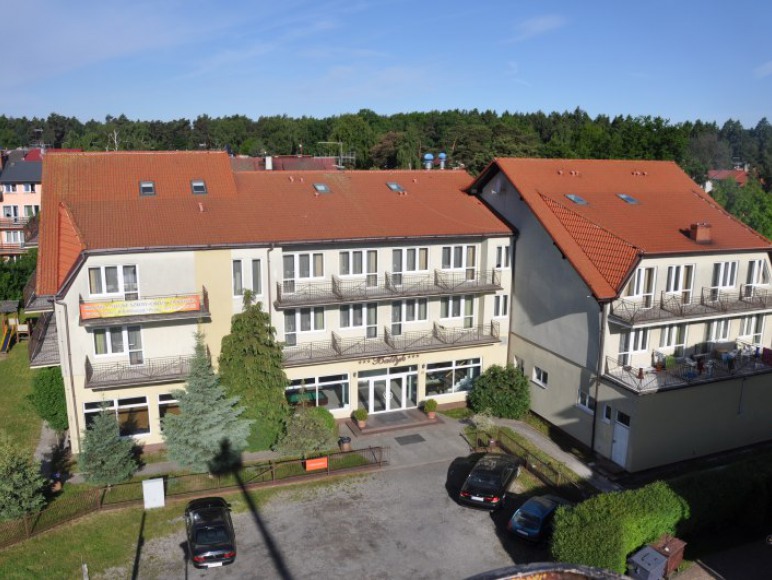 The guests are:
- 52 rooms two, three and four and five students with bathrooms and balconies each (240 seats),
- a conference room for 90 people,
- Tv room,
- the snooker room,
dining room with a modern kitchen facilities,
- the grocery shop (in the building),
- green recreational area,
- playground for children,
- an outbreak and grill,
- custom database cycling,
- tables for table tennis and other sports equipment

Object is guarded and completely secure. In addition the ground floor of the building has 4m height, which is an additional "zabezpieczniem", there is no way to exit the building without the knowledge of the guardians, as well as access to the no stranger. The center is closed for night /from 22-ej to 6-ej morning - each teacher has its key/.The Center organizes boat trips on the "Baltic", trips to Mayor, Slupsk, Malbork and Trojmiasto and Slowinski National Park, Landscape Park "Valley Slupia", przekażdżki rides, bicycle tours "route consists of track", city tour ustecką "their original splendour and numerous attractions with bonfire, discos and can also barbecue and fishing.

Additional attractions for children:
- indoor swimming pool at a distance of approximately 300m from center,
- tennis courts, a, banquet sports at a distance of approximately 600m from the object,
- horse eagerly visited by children
- farming camels in a nearby Sławnie / about 30km from Ustka /,
- trips to Slupsk, Slowinski National Park, Mayor, Tricity
- boat trips on the sea e.g. at sunset,
- rallies bicycle beautiful "route consists of track",
- Courses dancing,
- baking of sausages,
- Olympic Sports and Olympics "cheerfully",
- search for amber at sunrise,
- walk in beautiful seashore promenade on which summer is many attractions such as known throughout Poland shows artificial ognii and fireworks, performances of music, meetings With artists and known actors,
- sightseeing Ustka: Picturesque Lighthouse, Museum of bread, Museum of Earth Usteckiej,
- disco with lights and smoke and many others.

Ustka (groats. Ùskô, German Stolpmünde) - city and municipality in northern Poland, in pomorskie, in Slupsk. Office of the rural commune of Ustka. Ustka is situated at the mouth of the River Slupia to the Baltic Sea. Is the city of port, , with the maritime and health resort. City borders the municipality of Ustka. According to data from 31 December 2010. The town was 16 062 inhabitants.