Show on map
from 30 zł per person/os. 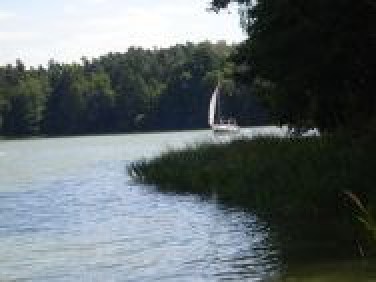 There are 9 beds (3 rooms). A HOUSEWIFE provides a range of facilities- All guests can use the laundry, microwave, refrigerator and liquid. On the back of the home you can sit or consumed dinner prepared on one of the grills.

In the vicinity are:

In the thirteenth century after his statement Jozef piå in years 1253-1254 and systems with Kazimierz Kujawski, successive masters of those areas were the Teutonic Knights. The current area of the City and Municipality of Ruciane Nida - he was then the Procuratoria as piska. With the arrival of the Teutonic Knights began the planned action osadnicza that most intensity returns after the signing of the Treaty on the lake in Mełno 1422 year fixing the boundaries between the State Teutonic Order, Polish and Lithuanian. After the Prussian Homage To in 1525. Those lands were contained in the secular state of Prussia, lennem Poland. Despite the continued by the Prussian policy kolonizacyjnej, to eighteenth century division Rucianego-Nidy remained sparsely populated, above all as a result of the invasion of Tatar and Lithuanian and ravaging these districts of natural disasters. The most intensive phase of the restocking of those lands occurred only after 1825, when the King Friedrich III published his regulation giving the right to settle on those lands staroobrzędowców (starowierców). The first villages called from the names of its founders, were created in the municipality of Ruciane Nida - already from the year 1830. Next to the typical residential buildings were built molenny - The Churches of the old faith and pustelnie and monasteries (two male and one female).

In the years 1975-1998 city administratively belonged to the while placing all California customers. Close to 15 thousand hectares commune Ruciane-Nida included in the Masurian Landscape Park and by the same city flows river Nidka.
City rights received 1 January 1966. Ruciane-Nida was created by the combination of towns:, Ruciane Nida, Will Ratajowej and Guzianka Wielka. Zasadźcą Will Ratajowej in 1502 was Jakub Rataj originating from Kujawy Region. Ruciane called Rudczanny/Rudschanny, in the Third Reich - Niedersee. Nida was called Nieden. The city is known tourist center in the heart of the Mazurian Lake District. The city is the railway line D29-219 - Olsztyn - Cork - Świętajno - Write - Elk. To 1945 there was also another railway line connecting Ruciane-Nidwith Mrągowem. In Ruciane during the summer period is ejected most south marina Inland Masurian.