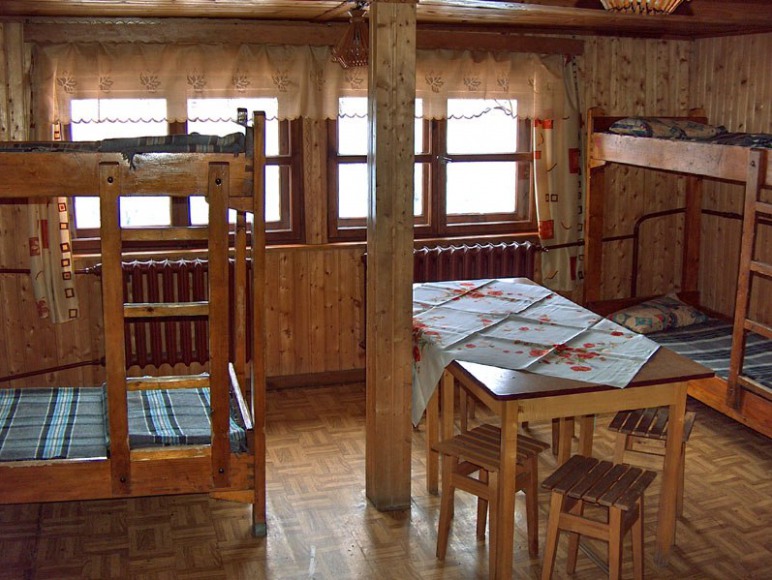 The Hostel Hall Krupowej is in band Babiogórskim - at the border of Beskid Zywiec and Makowski, between Zawoją, Jordanowem and Zubrzycą, about 10 km to the north-east of the "Babia Góra" mountain. The exact location of hostels has been presented on the mapped below.

A hostel offers its guests 38 beds in six comfortable rooms. These are two double rooms, two quadruple rooms, one room dziesięcioosobowy and one room szesnastoosobowy. If necessary, you can provide additional bed places on mattresses. All rooms are equipped with regular or bunk beds, airbag, blankets or duvets, tables, chairs, hooks and rack or shelf. One of the rooms has its own toilet. Residents of the other rooms may use the three common restrooms. In all rooms is central heating, therefore all the places are available throughout the year. Most of the rooms out to the south - toward the Tatra Mountains.The Hostel HALL KRUPOWEJ PROVIDES:
-Full support groups, tours and individual tourists
-excellent, HOME KITCHEN
- cozy rooms
- a stylish dining room with a fireplace
-WITH HOT AND COLD RUNNING WATER, CAB SPRAY
-CENTRAL HEATING
-POSSIBILITY LIGHTERING STORAGE WITH GREAT SIDZINY POLANA
-reasonable prices

In Winter, snow on the Road Enterprise is regularly slaughtered tracks scooter mangetout, so you can conveniently vehicle occur to hostels, irrespective of the thickness of the snow cover and the patency of tourist routes.

Using the public communication, near the Hall Krupowej the best way to reach Skawicy (minibus service and buses relationship Krakow - Zawoja), where the Hall Krupową leads blue route and to Top Zubrzycy Cold Holes (minibus service relationship Krakow - Zubrzyca and Nowy Targ - Zubrzyca), where the Hall Krupową can reach the blue route by Policę or by community. The Road Enterprise (trawersująca eastern slope Czyrńca) is currently the easiest and most picturesque with the shortest routes leading to hostels, but in the absence of transition it requires a map or GPS.

While for tourists motorized, nearest hostels parking is located in the Great Sidzinie Glade. To reach you turn toward Sidziny road connecting Jordanów with dry Beskidzką (driving from Jordanowa - left, approximately 2 km behind the town). Then, after approximately six kilometers (vis-a-vis Bus Station Sidzina Oak) turn right to after ten minutes get to the Sidzina United Polana. There (next to the bus stop or parking area forest) you can leave your car to follow the black trademarks, after about an hour come on Hall Krupową. The Polana can be also reached by the Top Zubrzycy (on road rozwidleniu at school, turn right). In the vicinity of hostels is also road connecting the Skawicę Juszczynem.

27 of November 2014 14:21
This description has been machine translated into english
Nice service staff and friendly owners!
And the same hostel clean and worthy of :-)
Ocena: 5/5
Pokaż szczegóły oceny
Price in relation to the offer
Ocena: 5/5
Facilities and equipment
Ocena: 5/5
Additional offers and entertainment
Ocena: 5/5
Location
Ocena: 5/5

24 of November 2014 12:56
This description has been machine translated into english
You can say that a hostel is located on the end of the "world" and is odskocznią from everyday life and the big city.
I am recommending, especially if you want to relax and spend a few days in silence.
Ocena: 4,3/5
Pokaż szczegóły oceny
Price in relation to the offer
Ocena: 5/5
Facilities and equipment
Ocena: 4/5
Additional offers and entertainment
Ocena: 4/5
Location
Ocena: 4/5

18 of November 2014 15:09
This description has been machine translated into english
Super place and very nice owners, delicious food. I highly recommend -each these attractions.
To see.
Ocena: 4,3/5
Pokaż szczegóły oceny
Price in relation to the offer
Ocena: 5/5
Facilities and equipment
Ocena: 5/5
Additional offers and entertainment
Ocena: 3/5
Location
Ocena: 4/5

14 of November 2014 09:35
This description has been machine translated into english
For me this hostel is an excellent alternative and odskocznią from everyday life. It is situated in a beautiful area and appealing to distant walking and the magnificent view.
The food are tasty , a whole hostel is clean and neat.
For someone with a big city there is no better odskoczni from reality than the proximity of nature.
Ocena: 4,5/5
Pokaż szczegóły oceny
Price in relation to the offer
Ocena: 5/5
Facilities and equipment
Ocena: 4/5
Additional offers and entertainment
Ocena: 4/5
Location
Ocena: 5/5