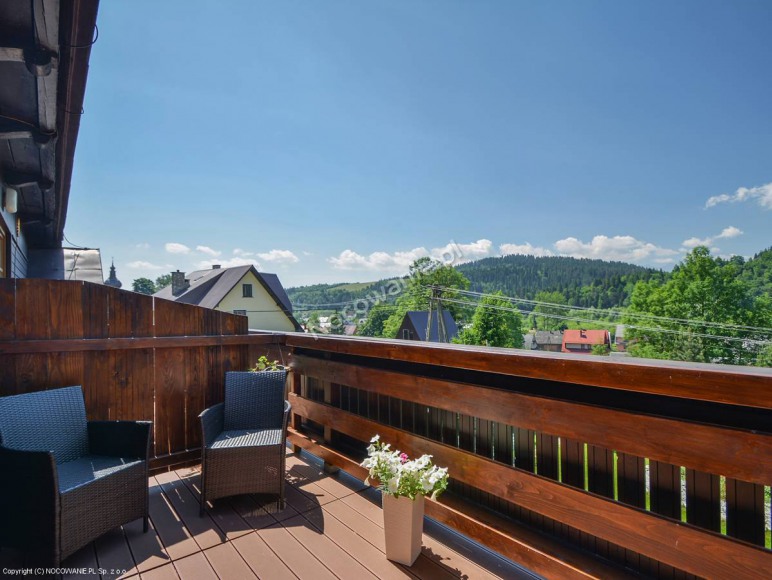 In the neighborhood of the resort there is a rafter harbor in Kąty (3,5 km), which isver well-known for boat rafting through the "Przełom Dunajca" from Krościenko and Szczawnica, by the 14th century castle in Niedzica (2,5 km, the ruins of the Castle in Czorsztyn from 14th century as well (15 km) and 15th century church in Dębno which is considered a national, historical heritage. The proximity of the Slovakian border allows sightseeing of the picturesque villages placed nearby: Spiska Stara Ves (2km)and Cerveny klastor (7 km) in Slovakia.

From the resort's premises there is a magnificient view of the Pieniny, Tatry, Czorsztyńskie Lake and Sromowieckie Lake.

In Orle Gniazdo there is a canteen (for 120 peaple) known for it's excellent food. The resort has a sauna, bicycles for rehabilitation, children's playground, volleyball, basketball, tenis, fireplace, parkin for 10 vehicles and bicycle rentals (10 pcs).

Orle Gniazdo Resort organizes throughout the year "green" and "white" schools in which approx. 120 peaple can participate. During the summer and winter holidays we organize camps. From June to August we organize holiday stays. Throughout the year: team building integration trips, training and conferences are held.

Additionally for our guests we have lunched Wi-Fi in technology IEEE 802.11b/g covering 80% otf the area of the resort. To use the Internet one needs to have the unit operating in this standard and a password that you can get at the resort's office.

Sromowce Wyżne - a village in Poland located in the Malopolska province, in the district of Nowy Targ, Czorsztyn in the Pieniny over the Dunajec river. Between years 1975-1998 the area was in the province Nowosądeckie.

In the Sromowce Wyżne on Wygonie there was supposed to be a castle, which in the fifteenth century had to act as an auxiliary guard for the castle Czorsztyn on the Polish-Hungarian border. Currently there is no trace after this castle, however the name of the hill on which the castle that was supposed to be - Zamyczysko- remained.

One of the main tourist attractions of Sromowce Wyżne is rafting on the Dunajec. it is also worth to visit the regional Chamber, which is organized by the local country club. Another attraction for tourists is a historic church. ST. Stanislaus, next to which there are monuments of landowners and founders od the church, the Drohojowski family.

In the village there are held summer festivals with performances from regional folk groups. In the viciinity of the village there is a ski lift - Polana Sosny Niedzica, hydroelectric power station where you can watch films and visit some of the interior of the dam on the Dunajec.